A Toast on the Cap

On Tuesday we said our goodbyes to Bill and Audrey at the Victoria Guest House and wished Liz and George and their crews good luck while they waited out the weather for their swims. Dave, Heather and I took the ferry to Calais, a much shorter trip than our previous crossing. 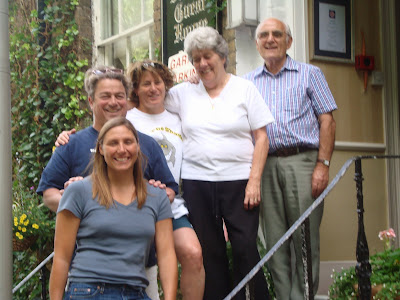 The Connecticut Crew (Dori, George and Liz) with Audrey and Bill at the Victoria Guest House in Dover 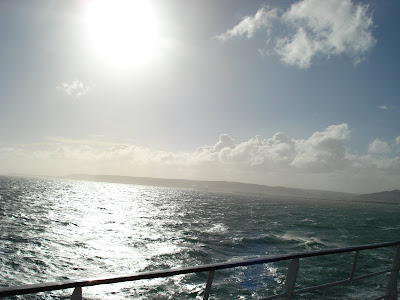 Leaving Dover by ferry this time 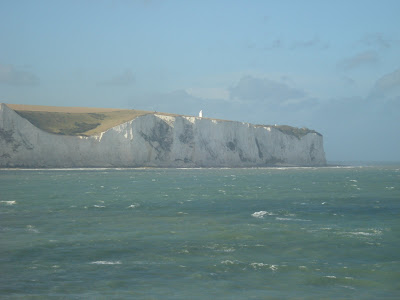 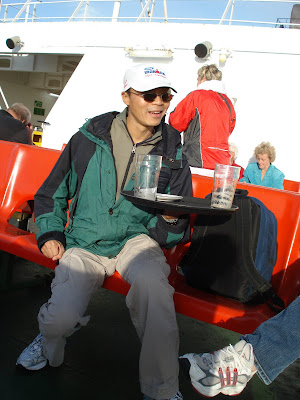 On Wednesday morning, we set off in our Ford Fiesta rental car to see Cap Gris Nez in the daylight. We drove through many cute French towns on our way to the Cap. We stopped for lunch of mussels and pomme frites. We bought a bottle of local beer called 2 Caps (named after Cap Blanc Nez and Cap Gris Nez) to take with us the Cap for a celebratory toast. 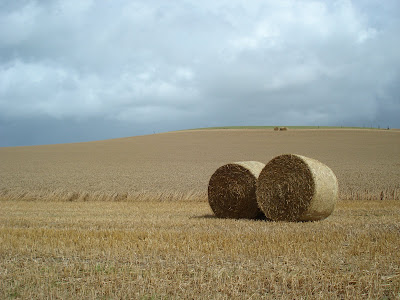 When we got to the Cap, we had to wait out a brief sun shower at the lighthouse. I had heard from one of the ferry operators that 50 MPH winds were expected. They weren't kidding! We later found out that the ferries were suspended that day. 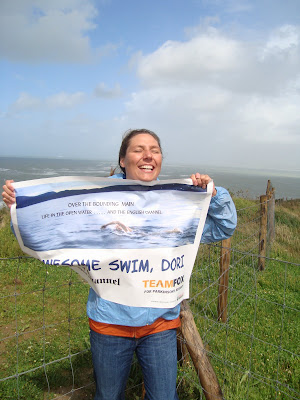 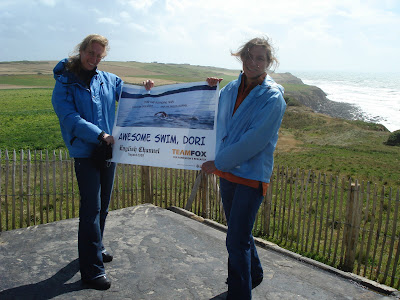 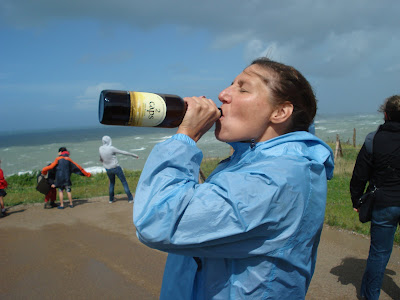 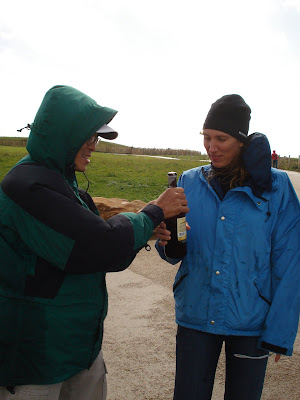 Celebrating at the Cap 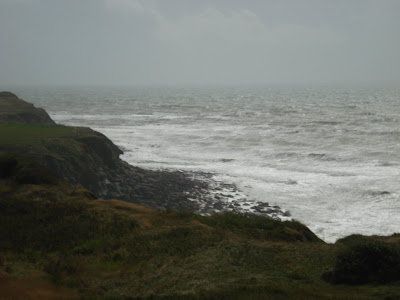 Rocky shoreline under the lighthouse, approximately where I finished my swim
Posted by Dori Miller at 3:43 AM 6 comments:

Thanks for all the messages! I made it to France, to the light house, in 10:13 or 10:16. I left some skin on the rocks for good measure. I was seasick about 3 hours in and left some snacks for the gulls and fishes. Felt much better after that. Crew was seasick with me. I am safe and happy. A good hot bath is in order.

Thanks so much to Chris and his crew and my crew for sticking it out with me when the going got tough and we all had our doubts. Thanks to everyone I met on the beach this week, Freda, Barry, Irene, Louise and Cliff, Bill and Audrey at the Victoria Guest House and the Connecticut crew.

Now I know a little something about the Channel and I'm looking forward to taking the ferry next time.

I forgot who told me about the peppermint tea this week... it was my savior.

Excellent news that Dori is still out there.

Sorry I can't be more specific. No direct contact with the crew. Will post news when I have it.

Posted by Dori Miller at 8:21 PM No comments:

'Chris (Dori) are WNW of Dover just about to enter the Separation zone.'

The Separation Zone is basically the middle of the Channel that separates the two shipping lanes so Dori is doing really well.

Sorry that I don't have any more info at the moment but communication by cell/mobile is touch and go half way across.

I thought I would be posting photos from our little hike along the White Cliffs yesterday. But, it turns out that today I am going to swim the English Channel!! I forgot to set my alarm clock so Dave woke me at 9am with a note that Chris, my pilot had called. I called Chris over breakfast and he said that there a small window of good weather today.

We will be setting off from Samphire Hoe at 2:30 pm BST. There are northwesterly winds today so they will be at my back and hopefully giving me a little push to France.

On A Clear Day

Today was the nicest day since I arrived in Dover a week ago. A few relays and solo swimmers went out today and made it to France. It was warm and sunny with very little wind. The water in the harbour was flat, much different from the conditions this past weekend. I decided to take today off so I sat on the beach and watched the other swimmers do their laps back and forth across the harbour.

Here are some photos of Dover Harbour. 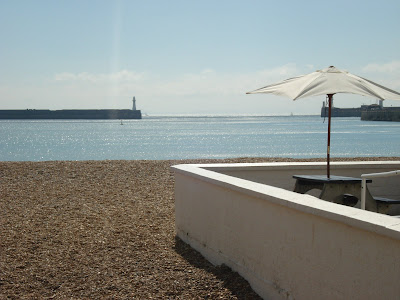 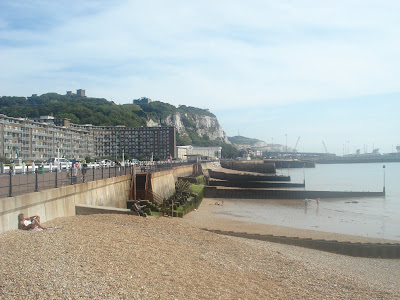 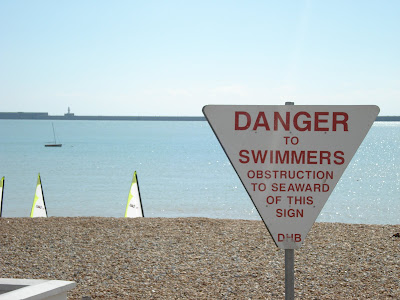 Looking towards the left wall at low tide. Ferry coming into port. 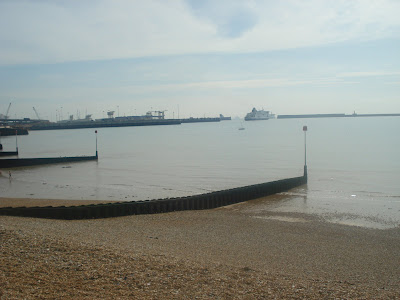 Looking towards the right wall. 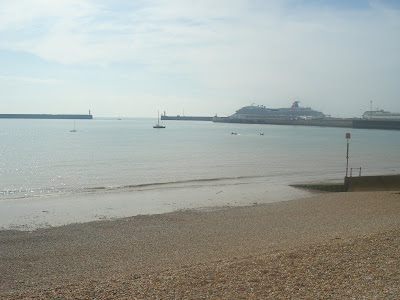 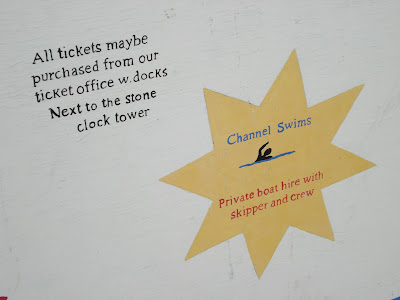 The Seafarer II, my ride back to England. 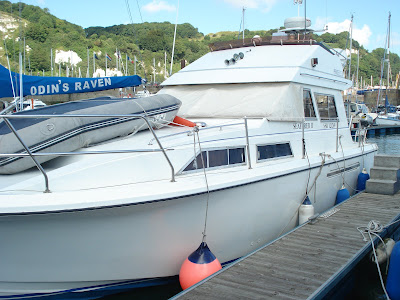 Training in Dover Harbour has been and fun and interesting. Yesterday was a beautiful sunny day, but it was very windy. When I got to the beach there were a few other swimmers who had just completed their swims. I met Cliff and chatted with him before my swim.

When I got in the water I noticed two things; the water didn't feel cold to me at all and it is really, really salty. I don't remember it being that salty when I was here last May. I just remember it was really cold.

There are piers with ferry terminals on either side of the harbour. The walls of these terminals create the harbour where the swimmers, sailers and rowers train. With the wind coming from the south, the right wall provided a little relief and the water was calmer. The other side of the harbour was very choppy because the water was being pushed against the opposite wall. I swam for an hour and a half in the choppy water.

Today was cloudy and the water was even choppier than the day before. We gathered early on the beach because the swimmers had to be out of the water by 1pm for the Dover Regatta. After checking in with Freda, getting my cap and greasing up, I was ready for my 4 hour swim.

It was low tide when I started swimming and even though it wasn't as windy as the before, there was a lot of water moving around in the harbour. I swam laps back and forth from swimmers beach to the left wall. I came in after an hour and 20 mintues and got a warm cup of juice and Maxim from Barry. I spend much of the next hour swimming against the current, swimming in place for 5 mintues for at time. It was a bit calmer in that spot so I could relax and not fight the water. After a while the current let me go and I swam forward. Then I turned around, swam back and did it over again. During the third hour the waves picked up even more as the tide came in. It was hard to keep from swallowing water or see over the waves. I wrapped up the swim at 3 hours and 50 minutes.

My friend Tony, who attempted to swim the channel last year, came down on the train from London for the day. After the swim we got paela and a pint from the vendors at the regatta.

Here is the view of the harbour after today's swim.