Maybe You Should Have Your Head Examined: Lessons From Cold Water Swimming 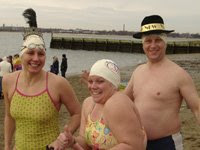 I wrote this for NEM News, the New England Masters Swim Club Newsletter.
"Maybe you should have your head examined." My mother has said this to me on more than one occasion. I've been called crazy, nuts, and certifiable, but it was meant in a good way. At least, I think so.
While training for my English Channel swim this August I've discovered a few things. One of them is that I like cold water. I never thought this was possible nor did I inherit this trait from anyone in my family. I used think that anyone who would swim in Antarctica or the Bering Strait is some kind of super human and maybe a little crazy. Last May I went to Dover to swim with the channel swimmers who train in the Dover Harbor on weekends. I specifically chose the first weekend of the season because I figured the water would surely be warmer if my swim attempt is in August.
Clinging to our towels on the rocky beach on a gray spring day, we received our instructions from Freda, who is fondly known as the "General." The channel newbies had to swim for 20 minutes, then come back an hour later and swim for another 25 minutes. The water temperature was 54F. I remember gasping for air, but after 10 minutes when I reached the pier, I realized that I wasn.t going to die. I had finally put my face in and was swimming a normal stroke, battling through the chop. I kept looking over my shoulder at the white cliffs in the gray fog. When I got out I shivered so much that I could barely get my trousers on.
I continued my cold water swimming at Plum Island and Walden Pond. I eventually stopped shivering so much. Some days, I.d jump in and think it was pretty warm. It was probably 65. But it became harder to find people who would keep swimming with me. My cold-water swimming partner, Elaine, and I swam at Plum Island until late October. We'd get strange looks from people walking on the beach. We cherished every ray of sunlight. The plovers who had been nesting all summer were now whizzing over our heads as we swam. They were so close and so fast. We'd stop every 5 to 10 minutes to check on each other and make a decision on when it was time to get out. We stopped for ice cream on the way home until the shops closed for the season. Indian summer was over and the cold air set in. What were we to do? Keep on swimming!
We returned to the cold water on New Year.s Day for the annual L Street Brownie Polar Bear swim. The water was really, really cold and my feet really hurt. But we survived and went back the next two weekends. There was a strange thrill to it. We learned from our first plunge in 37 degree water that wading in was not a good thing to do. There is no getting used to the water; it only makes your feet hurt. The best approach is to jump right in. We usually shriek a bit and begin swimming for all we're worth. There is that half second that I think that I can turn the clock back and not get wet. Then it's over in a cold, bewildering rush.
My longest swim so far has been about 40 or 50 yards. It probably wasn't even a minute. I could only put my face under in the last few yards; my hands, feet and arms were numb. I angled toward the surf so that I could stand up or crawl if I had to. There is of course danger in this. Never swim alone. I found that getting into the sauna followed by a shower seems to work quite well to warm up. Even the mad dash from the water to the locker room helps to get your blood moving. I went out and bought neoprene boots and gloves because I was concerned about frostbite. After swimming in cold water, even in summer, it's always best to warm up by getting into warm clothes, especially hat and socks and drink warm liquids to bring your core body temperature back up. You may look a little out of place on the beach in winter clothes, but you will be warm and safe.
I checked the water temperature in the Bering Strait last week. It was only two degrees colder than it was in the Boston Harbor. Maybe that swim in Antarctica wouldn't be so
bad after all.
http://www.swimnem.org/news/Newsletter_308.pdf
Posted by Dori Miller at 9:52 PM